Thornbury Chapter On Board

Here we go again with yet another new Tough Guy Book Club chapter! The club has continued to expand far and wide, but this time we’ve expanded a little closer to home with a new chapter in Thornbury, in Melbourne’s inner north. It was a bit of a surprise that we didn’t already have a chapter in Thornbury, but we’ve gone ahead and rectified it now.

As with all Tough Guy Book Club chapters, the Thornbury chapter meets in the pub, so the first piece of business for opening this new chapter was to find a suitable pub to meet in. That pub was Carwyn Cellars. Carwyn Cellars was a pretty obvious choice for the Goons who were organising things. It’s a pretty central location for locals, easy to get to, and it has an excellent beer selection.

Needless to say, the first meeting of the new chapter was a popular one: it’s not hard to convince Goons to go to one of Melbourne’s most iconic drinking establishments. And of course everybody likes to support a new chapter so will come from far and wide.

But it wasn’t just veteran Goons who attended the first meeting of the Thornbury chapter. Thornbury (and surrounds) has an active community and is a popular suburb for families. We did our usual thing promoting the new chapter in local community groups and managed to get a lot of traction from the dads of the area. Of course the Thornbury chapter isn’t exclusively a dad club, but, as with a lot of TGBC chapters, a lot of dads like the community and support the club has to offer.

A lot of the time when we start a new chapter, the first meeting doesn’t have a lot of book talk. This is just because there’s often a lot of new Goons who haven’t had a chance to read the book yet. That’s a not a problem, we have two rules for the club, don’t talk about work and don’t be a fuck head. Neither of those rules say “you must read the book.” The first meeting of a chapter also involves a lot of introductions and getting to know each other. Again, that’s OK. Book club isn’t just about the book. It’s about community, bonding, and making friends as well. So while we had some veteran Goons ready to talk books, we also had plenty of newbies. Even if it was less book talk, everyone still had a great time.

As always, it will be great to see how the Thornbury chapter grows in time. Thornbury is a great community and we’re proud to be part of it. 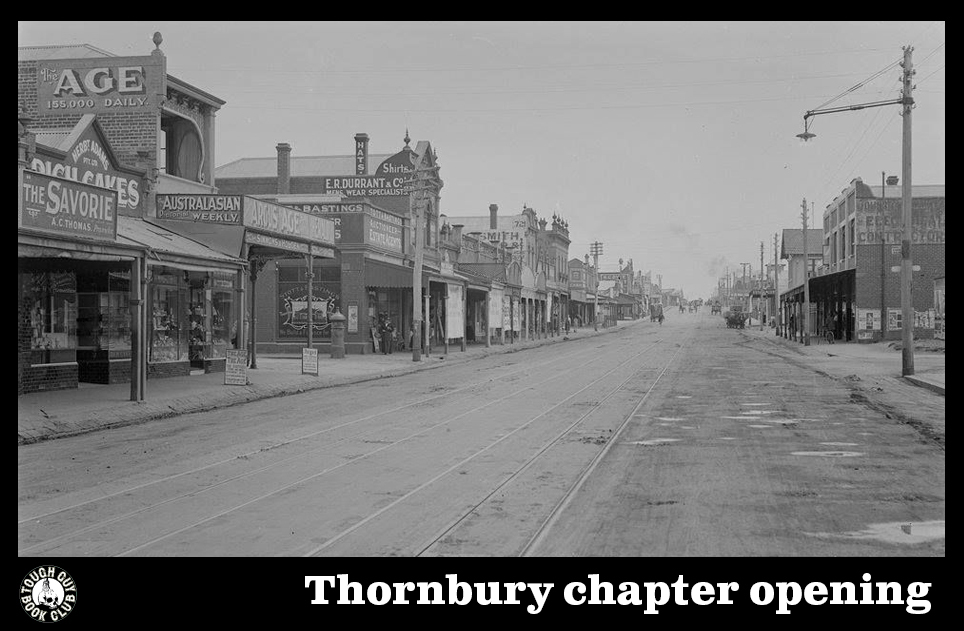