What's the first thing we learned from this month's challenge, where goons were tasked with planting a tree, shrub or bush somewhere they weren't allowed to, be it park, garden, or just on the bare-arse side of the road?

First thing we learned is that 'guerrilla' is a very hard word to spell.

Also, hashtags are confusing. Not only do you need to get all those stupid vowels in the right order, you have to sprinkle in a weird number of Rs and Ls, then you have to decide between the noun and the verb, the thing-in-itself or the pastime-slash-concept more generally. So if you check our FB page you'll find #guerrillagarden and #guerrillagardening and #guerilla and #guerrila and who knows how many variations in between.

We kind of created an administrative nightmare for ourselves, to be honest. But hey, fuck it! Someone will trawl through all those to make sure you get your challenges ticked off, and we'll cope. We're just trying to do a little bit of good here, not fight a war.

Second thing we learned is that some of goons are already equipped with extremely green thumbs. We have seasoned gardeners who've been doing this for years - tending apricots and mulberries around the neighbourhood, shoring up unstable slopes with New Zealand flax, joining council initiatives to plant dozens of saplings in empty lots. These are people who own shovels and know the scientific names for shit. Not to be messed with. Thankfully they're also extremely nice and more than willing to share their expertise with the rest of us.

That's the other group we learned about this month - the goons who aren't regular gardeners, don't get the time or the inclination, or just don't have a clue. Still, they got out there and gave it a go. Whether they were planting a flame tree (and getting the song stuck in all our heads for a week, thanks), sticking some native flowers in the nature strip, or just scattering a few veggie seeds by the roadside, every little bit helps.

Mostly I think we learned that Tough Guy Book Club really loves an adventure. Who doesn't want to take their kids to the community garden? Or go out after dark to help their friends dig a hole? Or sneak onto a golf course in the dead of night with [NAMES REDACTED]? After all, this was our challenge for July, also known as Hemingway month. In honour of a man who spent his entire life having adventures. Even if the consequences sometimes involved ending a marriage or crashing a plane.

This is why our challenges come with rules. If it's fun and good for you and the planet and doesn't hurt anybody, we say let's go.

Come on down next month and see what our next adventure will be. 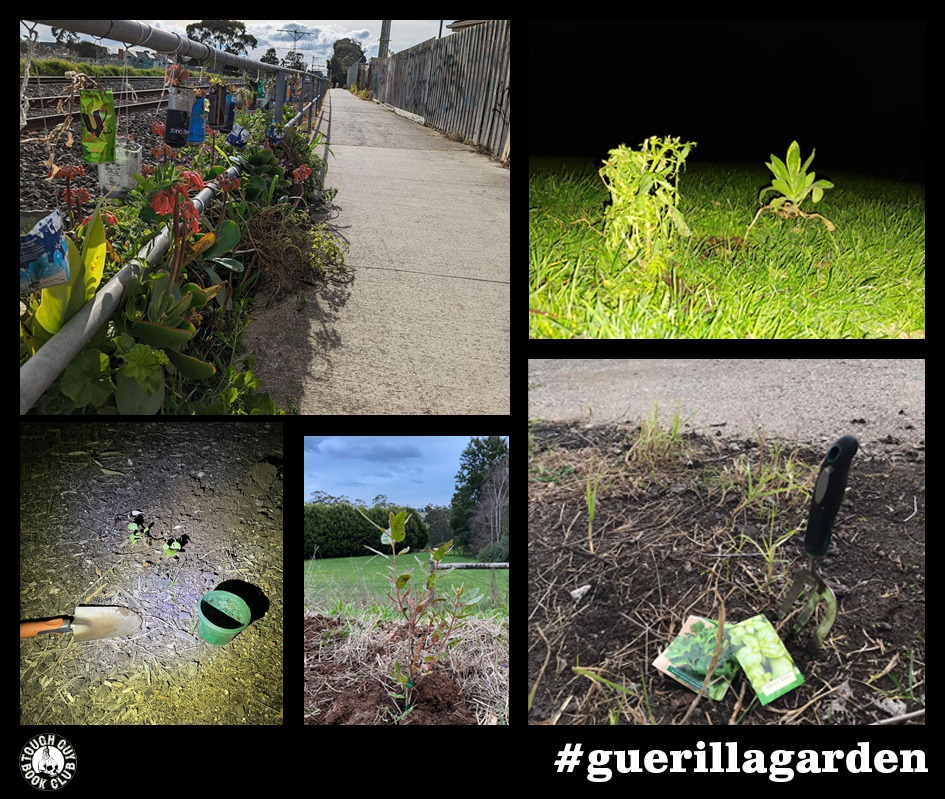