Dubbo is famous for lots of things. It has an observatory, a cool old gaol, some limestone caves, a whopping great zoo, and now most importantly, a chapter of Tough Guy Book Club.

"I've been part of this club for two years," says Dan Mowbray, prez of TGBC Dubbo, "There are two things that I love the most... the people you meet and become friends with and the books I would never have read without being part of this club."

Dan knows a thing or two about founding chapters. After reading about the club in the Guardian back in 2018 he started the mighty Wollongong Chapter. Then when the Thing That Shall Not Be Named (because we don't talk about work - it's a rule) took him and his family 500km from the south coast to the central west of New South Wales, he figured he might as well take TGBC with him.

Of course it wasn't an ideal time to be starting a new chapter. With half the country still locked down our patented 'Book Club For Men That Meets In A Pub' was a temporary 'Book Club For Men Yelling At Each Other In Little Boxes On Their Computer Screens Until They Figure Out Their Microphone Is On Mute', which is way less fun. But Dubbo toughed it out for September.

"It was a really great intimate meetup, we had two new goons join with a great discussion on the book," says Dan, "[But] I'm looking forward to actually being in the pub this month... You get much greater value chatting with guys at a pub in the flesh and tend to form better bonds."

Turning up to Tough Guy Book Club for the first time, when you don't know anyone and maybe haven't read the book, can be hard. Starting a new chapter is even harder. You might be left sitting around on your own in the pub for months until the word gets out. But when people come, they usually stay. Because we're pretty friendly, reading is a good habit to form, and people like an excuse to get out of the house on a weeknight.

"With Wollongong, we probably had about four months with the same goons which was excellent... then we really started growing the group," says Dan, "I started the Dubbo chapter as soon as I moved to the region because I couldn't go without this club every month."

He's not the only one. If you're ever in Dubbo on the first Wednesday, head down to the Commercial Hotel at 7pm and join Dan and the goons. They'd love to have you. 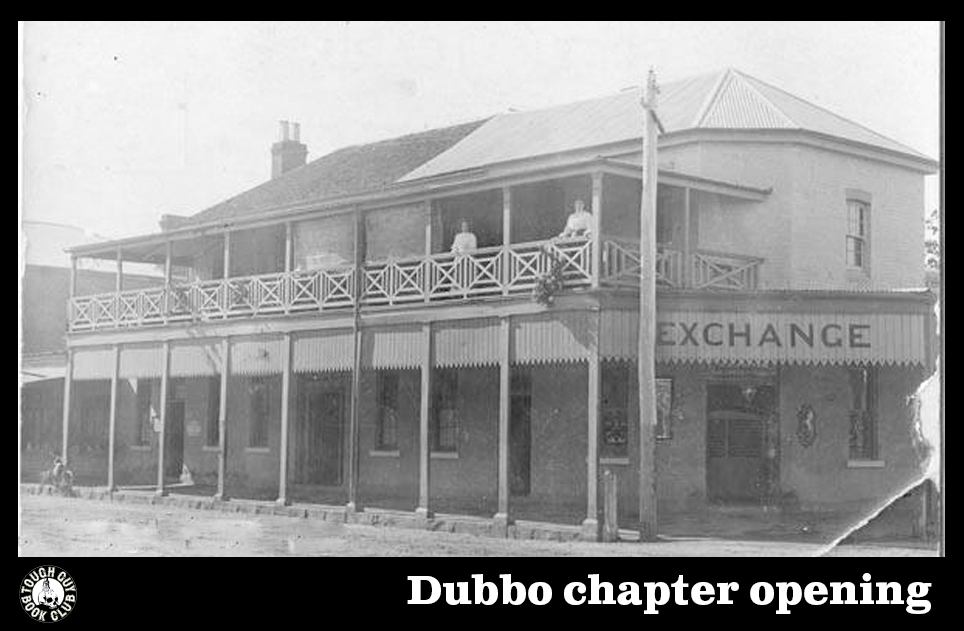