You’re hanging from a wire, attached to a dead eucalyptus tree, suspended over a freezing lake in alpine Victoria.

Your zipline harness pulls your thighs up to your shoulders and your testicles up somewhere around your chin. Your breath is choking hot, because for some reason you’re wearing a latex mask that looks like Kim Jong Un. Through the eyeholes you can see people waiting on the lake shore, down at the end of the wire. One is ready to catch and uncouple you safely. The other two are drawing longbows with foam-tipped arrows, taking aim at your helpless dangling arse.

But you’re not afraid. You’re not even nervous. You met these people two days ago but you trust them absolutely. You can’t wait to take your arrows in the arse, wriggle out of the harness, run to grab a longbow and shoot them in theirs.

I missed the inaugural Tough Guy Book Camp in 2016 but I heard good things. Thirty odd goons from all corners of Australia broke an axe off in a tree stump, went to the Museum of Australian Democracy at Eureka, and bushwalked through hangovers that would have killed lesser men. So in 2017 I knew I had to be a part of it.

I wasn’t the only one. Almost sixty goons nationwide descended on a new location, Lake Nillahcootie, on a cold long weekend in September. I came down from the Sydney chapter, driving all seven hours on the Friday with a fellow Sydney goon. This was someone I’ve met maybe a dozen times over the last year and a half. Still we talked about where we lived and where we grew up. We talked about books and authors and what Tough Guy Book Club means to us. We talked about Beechworth Bakery pies and stopped to eat one for lunch. When we were done talking we listened to Richard Flanagan’s Death of a River Guide on audiobook. It was a hell of a road trip for a couple of acquaintances but we weren’t nervous. We were honest and a little bit vulnerable, and we enjoyed our adventure together.

This would be a theme before the weekend was out.

We rolled into the dirt car park of Camp Nillahcootie – a school camp facility with cabins and common rooms – and were greeted by our fearless leader, Shay. We were led down to the lake shore where the barbecue and the bonfire and the custom-build axe throwing target (more on that later) were located. A whole army of goons were milling around laughing and talking shit.

Tough Guy Book Club, to me in Sydney, means the same group of six or eight friends every month, with the occasional new recruit thrown in. A few hours in the car with a fellow Sydneysider was one thing but here were dozens of goons who were unknown to me. With their uniform of jeans and boots and flat caps and beards they basically were me. I wandered around for a few minutes pretending to take in the view, but really just not talking to anybody. I didn’t want to risk it.

I felt the Fear.

Not sure how many men will know what I’m talking about, but I’m guessing it’s more than a few. There’s a strange thing you experience around other men. A sort of tension, a low level hostility, a vague sense of terror. Because you can’t escape this idea that you’re in permanent competition with every other male of the species. You’re trying to be tougher, smarter, more successful, more experienced. Every time you meet another bloke you’re secretly, stupidly sizing each other up. You can’t help it, it’s an instinct, and you’ve been trained to do it all your life. So you spend most of every day mortally afraid that you’ll be seen, by someone somewhere, as less of a man.

There on the grassy shores of Lake Nillahcootie, I thought I’d made a terrible mistake. What was I doing here? I flailed around for one or two faces I knew and got ready to do what a lot of us do all the time – act like a Tough Guy.

Then someone came and said hello.

A former Sydneysider, now living and book clubbing in Melbourne. We played the awkward TGBC game of trying to catch up without mentioning work (it’s a rule), and gradually did away with our nerves. Then I found another fellow Sydneysider. Then a Melbourne goon who had stopped by a Sydney chapter meeting and remembered, after all that time, to ask about my busted shoulder. Then I met the founder and sole member of the legendary Toowoomba chapter, who runs his own meetings from the comfort of his mancave armchair, whiskey glass in hand.

Maybe these goons felt the Fear as well, I’m not sure. It never really came up. We were too busy drinking beer and eating sausages, admiring the night mist over the lake, thunk-clanging throwing axes into the target.

I don’t remember much about that Friday night, to be honest. What I remember most of all about Tough Guy Book Camp is that every time the Fear came upon me, something happened to take it away.

Like on Saturday morning when I woke up at 8am, warm in my sleeping bag with a tongue made of carpet. There was supposed to be a bushwalk bright and early and I had set an optimistic alarm. But I rolled over, of course, and went back to sleep. An hour later I felt dumb and lazy and left out, but then I learned that only half the bushwalkers made it. Even those goons got lost and climbed the wrong hill. Still, I hear the view was lovely.

On Sunday morning a longer walk was supposed to depart even earlier, but it was cancelled. Turned out a grand total of two intrepid goons showed up. The rest of us were in our bunks, cradling our aching heads and praying for bottled water or death.

As well as my fragile manhood I was nursing that busted shoulder, so I brought a couple of baseball gloves to test out my throwing arm. Throwing things generally was a big deal at Tough Guy Book Camp, and you never wanted for someone to throw with or at. Frisbees, bolas, slings, knives, axes – everything was handled with care and curiosity. We weren’t trying to do it better than each other, just to do it as best we could. The only person who got hurt was me, trying to throw a baseball way too hard with a rush of testosterone and a ruptured tendon. Sometimes a little Fear can be good for you.

Down at the archery range throughout the weekend, goons who had never fired a bow before got help from goons who had taught archery in schools. Anything on target was a win for all of us, and it was okay to swear when the bowstring snapped your forearm or admit that your fingers really hurt. Before long the target wasn’t even important, so we dragged it out to the far end of the range and lay it flat, so we could fire upwards in proper arcs like medieval bowmen. Safe to say, if you were an enemy soldier you’d be safer standing where we were aiming.

There was whiskey tasting Saturday night, where nobody had to pretend to know too much about whiskey and everybody learned something – mainly that dice games and Jameson do not mix. Guitars were passed around by the fire and goons who might never sing in front of people did acoustic covers that sent us all quiet. When it came to the singalong knowing the words wasn’t nearly as important as yelling them good and loud. One talented songwriting goon even had a ‘Ballad of Tough Guy Book Club’ ready for the occasion.

This is not to mention all the activities I didn’t manage myself. Boating and fishing on the lake was a big success I hear, some goons landed fish before others had even struggled up for breakfast. There was Indigenous bushcraft with our special guest guide Jamie, who wore so much camouflage I’m surprised goons could even find him, let alone follow him. And there were the tech-savvy goons who fought to get a signal on the camp TV, failed, but were invited into the camp manager’s living room to watch the Tigers (hooray) and the Storm (who cares) win their respective grand finals.

And of course there was the flying fox, the foam arrows, and the Kim Jong Un mask. If he didn’t grab you, there was a Donald Trump one as well. I didn’t actually strap in for the ride myself but I took a picture. There was something about that image – the bloke dangling, the archers lined up, the goons in camp chairs spectating with beers in hand – that completely summed up Tough Guy Book Camp for me. Here was a place where you could be very vulnerable but also very safe. You could be a complete dickhead and a responsible adult at the same time. This was a place where you could be a boy without having to act like a man.

On Sunday night we did what we do and discussed a book – Richard Flanagan’s Death of a River Guide. Tough Guy Book Club is one of the only places I don’t feel the Fear. I’m pretty confident talking books, a bit superior even. It makes me feel clever and pretentious. We were just talking about how Aljaz Cossini, the main character, loses his daughter to SIDS, when one goon admitted that was the hardest part for him. He had been through the same.

It cut me straight down to size. There I was competing again, making myself look big, acting the literary tough guy. And here was someone – like me on that first day on the lake shore – being honest and vulnerable and looking for a connection.

From then on I made sure to shut up and listen hard. I didn’t feel the Fear – I think I felt the opposite. Something warm and friendly and accepting. Something less about being a man, more about being a human. And I thought, this is what TGBC teaches us. This is what we need to feel more often, if we want to be better men. 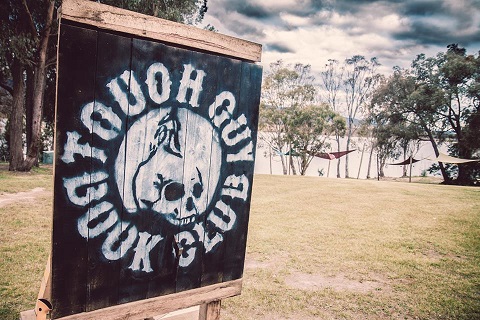 On Monday the survivors went for a final farewell lunch at a nearby winery, but us Sydneysiders had to leave early. My passenger on the way down hitched a lift in the other Sydney-bound car. I hope they found the same connection I did, because in Sydney traffic it took them ten hours to get home.

I was taking my journey easy. I stopped off overnight in a little town called The Rock, near Wagga Wagga. My best friend from high school now lives there. I was best man at his wedding. Now he has a wife, a house, a dog, two kids, and we never see each other. Sometimes he makes me feel the Fear, like I barely have my life together compared to him.

And sometimes he makes me feel the opposite. When he messages me about the pubs he never gets to visit, the video games he never gets to play. I realise we’re pretty much the same, sometimes we feel overwhelmed by responsibilities, we need to talk to other men about something, anything else.

So for his birthday I send him books in the mail. I keep telling him, he needs to join the Club. 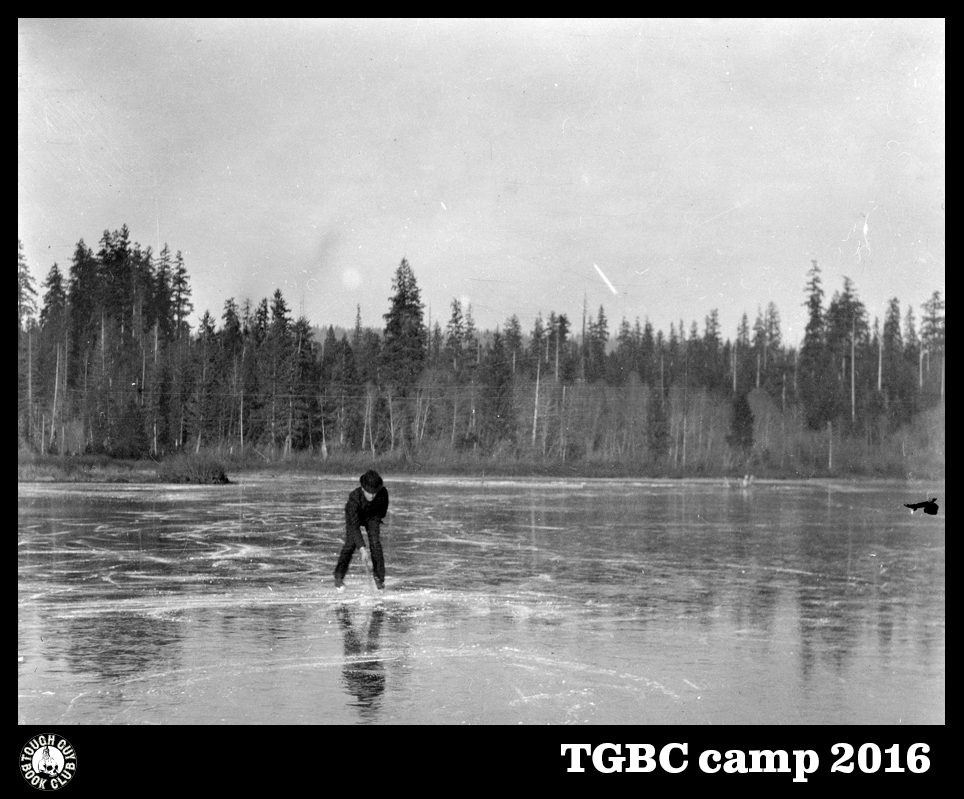