Another month, another new Tough Guy Book Club chapter. That’s not to say we’re only opening one new chapter a month (it seems like it’s been at least new one every month), it’s just that between reading books, hitting the pub, and generally just enjoying Tough Guy Book Club stuff, we only have so much time to make these announcements.

The new chapter this time is in Beechworth, in many ways a second home to TGBC, despite there never being a chapter in the Victorian High Country until now. Way back when the club was a lot smaller, TGBC had its first camp in Beechworth. The town has since become “the hidden heart” of a lot of what the club has become since.

Beechworth has plenty of pubs to its name, but for obvious reasons the club is meeting at Bridge Road Brewers. It’s got great beer and damn good pizza, so it wasn’t a tough decision. It’s still a young chapter so we don’t know just how boozy it will get, but with a venue like Bridge Road, I’m sure the Goons up in Beechworth won’t have much trouble winning that honour.

But what else was there other than a bit of nostalgia, craft beer, and pizza? Well, the first book discussed at the chapter was Last Orders by Graham Swift. Word is this brought more nostalgic talk, especially around legacy. But, of course, with the subject matter of the book, more beers and more good times amongst new friends were found as well.

Everyone who came to the first Beechworth meeting was a new Goon, and Last Orders seemed well received, although it was easy to be distracted by the new company in such a cracking venue. Talk wasn’t strictly about the book. But does that matter? Not really…

Since the opening of the Beechworth chapter, we’ve expanded further in the High Country with another chapter being opened in Bright (unsurprisingly at the Bright Brewery; again, great beer, damn good food), with plans to expand further in the area.

We’re looking forward to seeing how our new Beechworth Chapter grows in the future. Tough Guy book club has a pretty cohesive culture throughout all of its locations, and Beechworth looks to be slotting in just right.

The Beechworth Chapter of Tough Guy Book Club meets at Bridge Road Brewers at Old Coach House Brewers Lane, Fort Street, Beechworth on the first Wednesday of every month. Look for the group of guys with plenty of drinks on the table (and maybe a book or two). 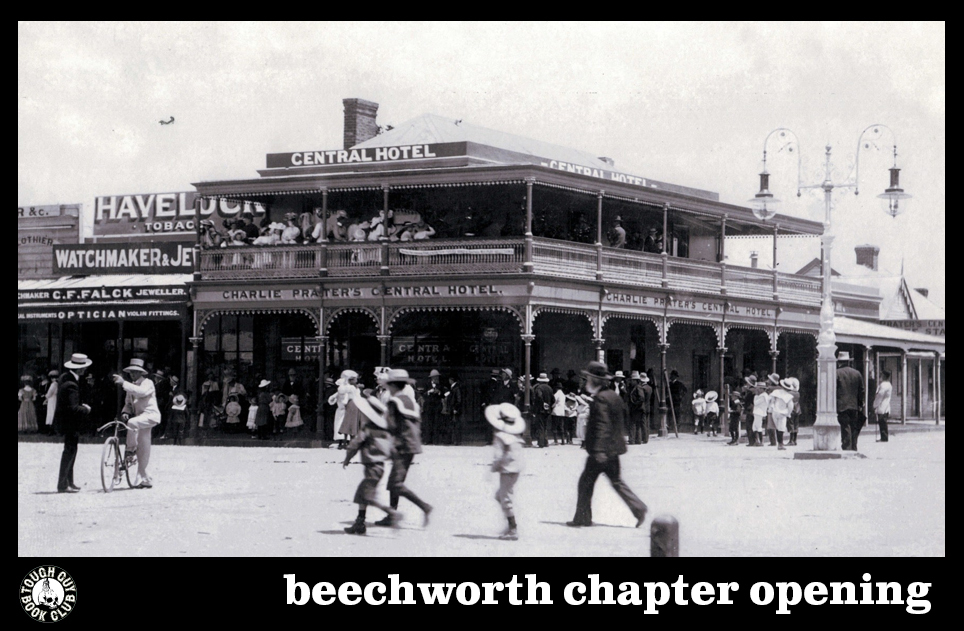