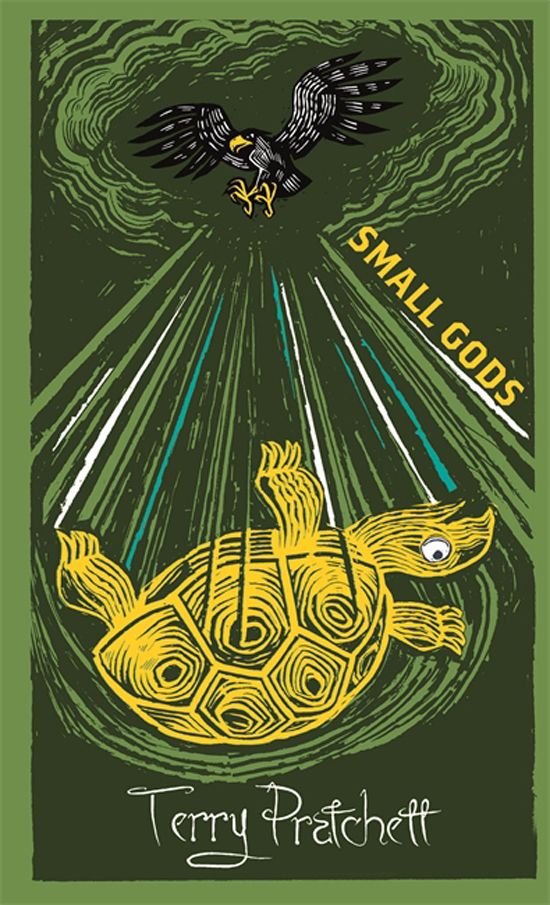 If I had been asked to recommend a book to begin exploring Terry Pratchett’s ‘Discworld’ or to come to grips with why he was such a popular writer, Small Gods would not have been the book I would have suggested. Instead I might have pointed at Guards Guards, The Witches Series, or perhaps one of the stand alone books such as Going Postal. Having issued this backhanded compliment to Small Gods I would have likewise not suggested you avoid it. It is fun. It provokes some thought. More importantly it does so whilst in and around the topic of faith without being overly judgmental or superior.

If you have not read any Pratchett before would be a good idea to prepare yourself. Many have commented his writing style is singular. Others would say it is unintelligible or very difficult to penetrate. His earlier books, of which Small Gods could be classed as, have a patter or rhythm to them with is referential and riddled with asides, jokes and footnotes. This style has been much copied but if you are not used to it the overall affect is at best distracting and at worst annoying. To help with this it is best to find an interview with Terry Pratchett or a recording of him reciting from one of his books. Once you hear how he talks you realise this is also how he writes. Once you have the author’s voice in your head his books take on a whimsical and comedic perspective which is distinctive and entertaining.

Having prepared the reader for the Pratchett experience the book discussion may now commence. It’s about a turtle who thinks it is a god... or it’s about a god who thinks it is a turtle... who has one believer... who doesn’t believe he is hearing the voice of his god... turtle.. you get the picture. Such is the way with Terry Pratchett’s earlier narratives. He uses the arrogance of the fallen god and the gormless neophyte to set up any number of gags and commentary on the nature of faith and its power to make smart people to really stupid things. The story is a meandering series of misadventures which look random but are necessary to bring together a series of scenes which would not work unless those things were put in place. The overall experience has been better executed by him but it is still worth reading and comes to a satisfying conclusion.

Some of Pratchett’s best comments about his books have come when he has been challenged or criticised in person. An appropriate paraphrasing of one of his comments would be when he was asked about his use of narrative rules to which he replied: If there is a one million to one chance of something happening at the climax of a book then that thing will happen... unless it is funnier if it doesn’t.