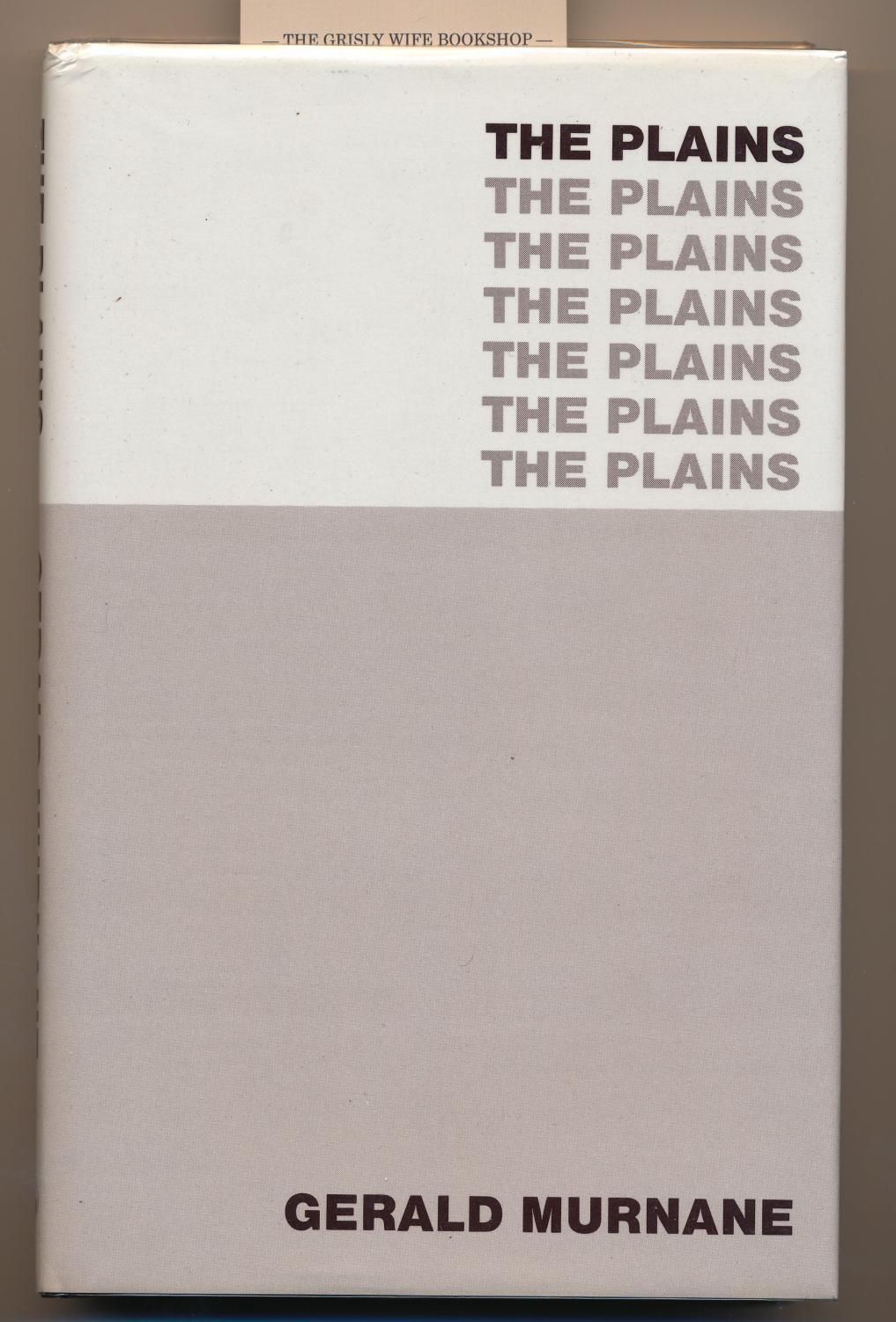 ‘A mirage of landscape, memory, love, and literature itself’- Murray Bail, author of Eucalyptus

As I kayaked up the Wye river, blissfully enjoying the smooth paddling stylings of my partner, the silence was broken by a shout from a fast approaching canoe: “Hey, aren’t you the guy who loved the camp book???” It seemed as though I was in the minority.

Murnane’s book The Plains, first published in 1982, documents the story of an Australia I have never known. From the landowners who met at the local hotel in town, to the wide-open plains and the lavish homes reminiscent of cotton-picking plantations from the old south of the USA, there was little I read that brought a sense of recognition. You see, I grew up (for a few years at least) in the northern parts of South Australia. There, landowners fought - and fight, still - for survival in the unforgiving plains above Goyder’s line. There was no talk of art or symbolism, tapestries or crests, or wars between tribes. There was only talk of rain, or the lack of it; animals, feed, and the local rodeo. There were no signet rings that glistened in the sunlight, and certainly no artists kept in residence for years on the dime of the landowner.

Twenty years ago, when I first arrived on the plains, I kept my eyes open. I looked for anything in the landscape that seemed to hint at some elaborate meaning behind appearances. My journey to the plains was much less arduous than I afterwards described it. And I cannot even say that at a certain hour I knew I had left Australia. But I recall clearly a succession of days when the flat land around me seemed more and more a place that only I could interpret.

As I read deeper into the book, I realised the story was more than a work of fiction. Murnane paints an allegorical picture of an Australia that has never existed; or maybe, somewhere deep underneath our surface sweat and dirt, it does.
The book centres around a young filmmaker, desperate to go to the plains seeking sponsorship for his idea. He wants to write and make a film about the plains of Australia, to give insight into this area that only he is uniquely equipped to do. He, like so many dreamers before him, comes to pitch his idea to the landowners; a pitch opportunity that takes a day to eventuate, and is over in the bulldust of the late afternoon light.

There comes a point in books like this when realisation can sweep over the reader – that is, if they stick at it long enough. Mine came at page 69, where the landowners are deep in monologue. The fifth landowner talks of a man who concentrated on documenting a small part of his land in exquisite detail, inviting anyone to come and do the same. When the two descriptions were compared, the differences would reveal the distinctive qualities of each man: the only qualities that he could claim as his own. It was at this point the book clicked for me, and I truly appreciate the complexity and enormity of what Murnane, similar in some respects to Neville Shute in books such as In The Wet, was attempting to achieve through the documentation of an Australia that doesn’t necessarily exist.

As I grew up, my learning of Australia was being told stories of Captain Cook, the bold explorer; stumbling across terra nullis, seeing its potential as the perfect penal colony. Then, the first fleet battling away, throwing the sail-cloth clad dead overboard as they made that epic one-way journey, all to create the first inkling of ‘our’ Australia. I wasn’t taught of the enslavement and massacre of Aboriginal and Torres Strait peoples. I was never taught their truths.

This is relevant to Murnane’s writing because, let’s face it, what is it that we truly know of Australia? What is the truth in history? There is the old saw that history is dictated and written by those who win. In the Howard era, historical ‘truth’ was pushed as facts. As numbers. As events with key dates, not the stories that were told. Now, we hear a much nuanced ‘truth’ with opinions and points of view from more than one side of the story. From the tribes and ancestors of those that were brutally murdered. We hear of the sites where massacres took place.

The ‘truths’ of history are somewhere intertwined between those who lost the wars, and those who survived to write it down. It could be said that the same applies to Murnane’s fiction; that his truths are a combination of reality and a yearning for what never was, but what he wishes could be.

Murnane’s writing style isn’t easy. There is barely a plot, let alone real character development; yet he is recognised globally as arguably one of the best writers to come out of Australia. He has a peculiar style, and has himself admitted the things he doesn’t do illustrate as much about him as the things he does. He types a single character at a time, eschewing modern technology (he only just got a smartphone): In 1979 I taught myself to type using the index finger of my right hand alone. Since then, I have composed all my fiction and other writing using the finger just mentioned, and one or another of my three manual typewriters.

So if through the narrative in The Plains, Murnane is creating is his version of the truth, a truth that like all others, doesn’t exist as a stand-alone - what is the essence of the story? In some ways you could view this book as the tale of a nation creating its own narrative. In other ways, the titular plains are the great Australian outback; the towns the capital cities. For some readers, Australia will be the plains, and other countries, founded in centuries of history, the towns.

The truth for me, like any real and complex truth, in reading this book, is different from the truth you uncover. And that’s part of its beauty and its strangeness. Once you read it, let’s talk of our differences and discover the qualities that we can each claim as our own.

A fantastical ‘Inner Australia’ consists entirely of plains. Its parochial landed gentry find diversion in a sycophantic pitch from a film-maker from ‘Outer Australia’. Once commissioned in this cushy gig as film-maker in residence, he of course makes no films, but reads, writes and obsesses on the arcane lore of the plainsmen.

A scene from Part One is representative of the whole.

The patron’s daughter takes her regular afternoon walk in the garden, and the film-maker has the habit of observing her while obscured behind the windowpanes of his upstairs library. He muses that she appears timeless, of indeterminate age, and unconnected to her setting on the plains. ‘Her figure was never quite distinct from the shadowy after-images of whatever I had been reading.’

One day, the daughter observes back. ‘I could not account for her looking up as she did, for the first time, at my window.’ This particular arrangement of perspective inspires the film-maker. He mentally composes a scene to form part of his unfinished film. After the daughter leaves, he ventures into the garden to look back toward the house from the perspective she had. ‘The window, enclosing only a sort of twilight, showed nothing of the room behind it.’ By experiment the film-maker learns that, from this angle, his gaze can penetrate a little into his cloistered room, and so as she watched, the daughter may or may not have seen his face, unless it were obscured by an image of the reflected sky, mottled by cloud.

From this prosaic account of a non-interaction, Murnane obliquely approaches his themes. You see, views are framed. You see, there are shadows. You see, perspective is everything. Nothing is certain; indeed, while an observer views one thing, his mind’s eye conjures another idealised scene. Now the observer, now the observed. In this way, whole pages of rumination drift by. Murnane describes a featureless plain with infinite gradations of detail. When certainty threatens to emerge, haze descends.

Why do I dislike Murnane’s writing? By leaving a lot unsaid, doesn’t it resemble Hemingway’s celebrated style, and his ‘iceberg theory’, where the master needs only to capture what appears on the surface in order to show the reader the stately mass beneath? Hemingway’s stories are elegant, pared-down sketches of vivid, visceral scenes. By contrast, ‘The Plains’ is a long negation, labouring the point that people project themselves onto blank canvasses.

Hemingway offers readers a window into human nature. ‘The Plains’ invites you to place your kernels of truth into a mirror tunnel, and then revel as they are reflected back multiplied.

In it I found no insights, but the failure is not my own. Move along folks. Nothing to see here.