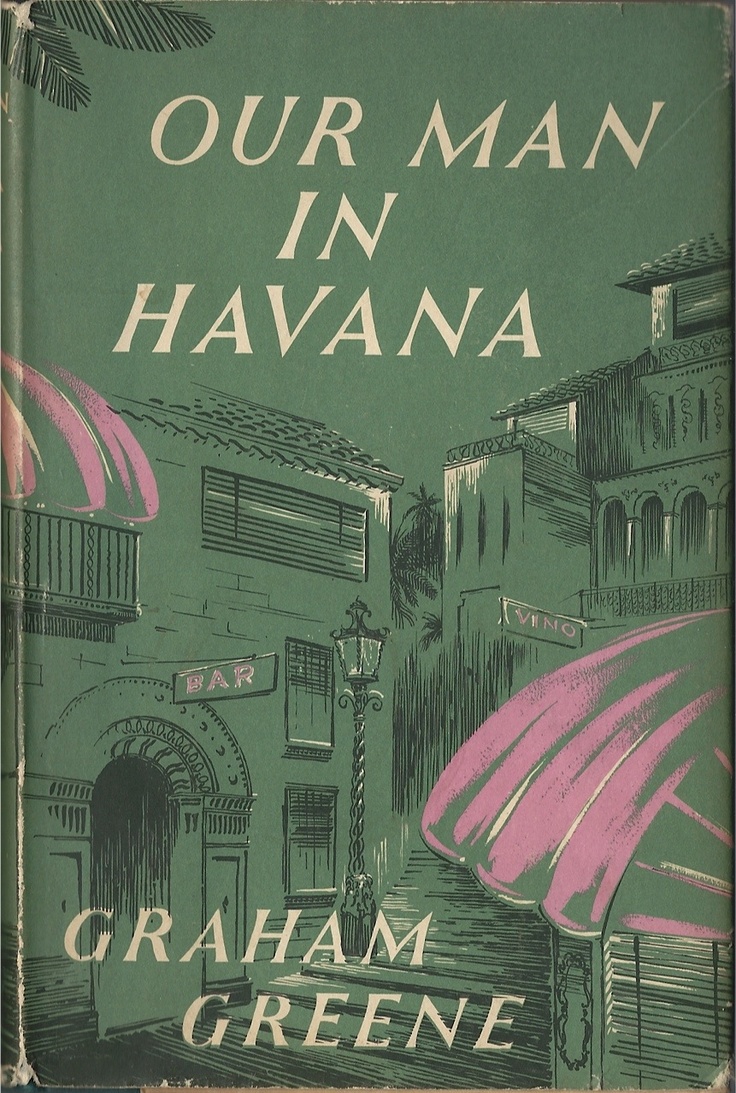 Graham Greene’s Our Man in Havana adds to the masterly storyteller’s vivid depictions of nomadic and faithless urbanites. This time, we are introduced to Wormold, a dreamy vacuum cleaner salesman in search of secrecy as MI6’s man in Havana. This is a humorous satire of a man in a dream of luxuries including monetary savings, company shares and dividends yet, in reality is met with fanciful falsehoods, loathing and love.

Set in Havana predating the Cuban Missile Crisis during the Fulgenico Batista Regime, the reader is introduced to a divorced retailer, James Wormold. Aside from the implied mediocrity of Wormold’s life at present, he is also the father of a beautiful, devoutly Catholic yet grossly unscrupulous (and curiously scheming) daughter, Milly. Wormold meets Hawthorne, who asks him to work for the British secret service. Wormold is proverbially short of a quid and given his daughter’s partiality towards indulgences, Wormold accepts the part-time espionage gig.

Perhaps due to excessive drinking, the secrecy of General Batista’s murders or, most likely, the fact that Wormold is an untrained agent, Wormold has no correspondence to send to London. By putting his imagination to work, he instead falsifies his reports using information gathered in media and creates a network of sources that are mostly falsehoods. His imagination reaches its apex when, at one point, he maniacally decides to send a report to London which depicts vacuum cleaner parts as a secret military apparatus.

Soon after London sends Wormold a secretary, Beatrice Severn, Wormold’s creations begin to blend with reality when Beatrice is ordered to contact Raúl, a pilot. Despite Wormold’s ostentatious plan, coincidentally a man whom shares the name as the elusive pilot dies in a car crash. An attempt to murder Wormold at a trade association gathering, followed by the death of the headwaiter’s sausage dog and the subsequent retaliation killing of Wormold’s friend, World War 1 veteran and confidant of sorts, Dr. Hasselbacher, Wormold confesses his confusions and creations to Beatrice, and is sent back to London.

This book is an amusing commentary on Greene’s views of intelligence services and their willingness to believe information passed on by local sources. I think some consideration of the book’s socio-historical context in important, especially given the proximity between the book’s publication date (1958) and the Cuban Missile Crisis of 1962. The unsuccessful poisoning of Wormold at the trade union meeting is also a reasonably unsubtle characterization of a Russian assailant during a period of simmering Cold War tensions. With this in mind, two questions surface: was Greene writing an anticipatory essay for the events of 1962; and who out of Ian Fleming and Graham Greene writes a better Cold War spy novel? This question needn’t demand an immediate answer. But if you find yourselves festering on this during TGBC meet at the pub, do it with a daiquiri and not a martini.