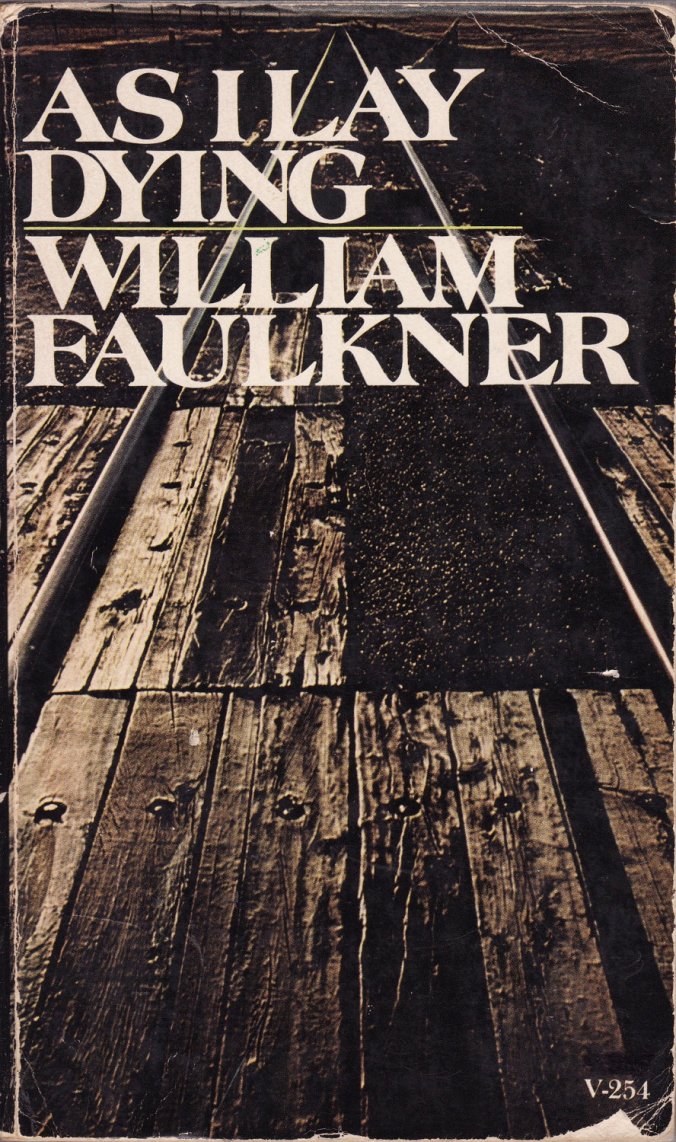 As I Lay Dying – Southern Gothic or Hillbilly Vaudeville?

I loved this book! My chapter (Williamstown) discussed it at length, but it wasn’t till I reread it at home in preparation for this review that I discovered how much I had missed the first reading.

The main questions about this book that need answering are:

The answer is, I think, that it ticks all three boxes.

I was struck by the burlesque nature of this book when I first read it. On the second reading I found it even funnier. The story is told mostly (but not exclusively) through the voices of the Bundren family members. Although there is the odd ironic joke in their telling of the story, they play a straight bat, as they tell of their lives and their interpretation of the realities around them. It is an Odyssey of death, flooding rains, raging rivers, drowned mule teams, unbalanced coffins, burning barns, broken limbs mended with casts of cement, an attempted abortion, circling buzzards, an increasing miasma of rotting flesh, a new set of teeth, and finally a new wife for Anse, who I think is his sister or perhaps more charitably, his cousin.

This heroic epic takes place over about 15 days. Firstly, Addie takes ten days to die. During this time Cash, who has ‘carpenter notions’ builds her coffin. Every plank is held up to the window for Addie’s approval before being nailed in. Then the whole family set off with the coffin for Jefferson which is 40 miles distant. It is during this journey of about 5 days, that the trials mentioned above, plague them.

This is a rich and meaty book, and rather than give an inadequate overview I am going to home in on just two chapters. The first one is Anse’s chapter which in my edition is p30-33. You would go a long way in literature to find four pages more hilarious than these.

Anse is your classic lazy, feckless whinger. In this chapter he blames the road for everything. The road brings every bad luck to his door and he has been charged taxes to build the thing. The road brings the doctor to Addie and ‘making me pay for it’. Anse, who hasn’t been to town for 15 years, reckons that the good Lord made man to be upright so that he could stay put and not be ‘a moving and going somewhere else’ like his sons are being tempted to do so that his free labour is in danger of being ‘threatened out of him’. As the flooding rain sets in, Anse blames the road for directing the rain up to his farm house and then settling there ‘like there ere wasn’t another house to rain on’. These four pages are a treasure trove of comedic one liners. I have a theory that Al Capp was inspired to create Pappy Yokum in L’il Abner by Faulkner’s Anse Bundren.

Now let us move on to Addie’s chapter p157-165. This is the part where burlesque ceases and the guts of the book are revealed. Addie moves to hillbilly central to teach school. She quickly discovers that she has no aptitude for the profession, in fact she hates kids. Then to escape, she marries Anse and it is in this relationship that she discovers that words like fear, pride, love, sin, salvation and love are abstractions, like mathematical symbols.

It wasn’t till Cash was born that she realised that ‘motherhood’ was a word invented by people who didn’t have children, because the ones who have children didn’t care whether there was a word for it or not. The same can be said of the word ‘love’ which is just a ‘shape to fill a lack’ by people who have never known it. Nevertheless, Addie is a deeply unhappy person and admits to loving only two of her five children. Cash and Jewell are enveloped within her love, the rest belong to Anse.

I have just read ‘Hillbilly Elegy’ by JD Vance. This memoir was published in 2016. Vance is of the white Appalachian poor class known as ‘hillbillies’ so what he has to say has the authority of experience. This memoir details the movement of hillbillies out of the South into the steel and manufacturing belt of Ohio in the 40’s and 50’s.

This is the region now known as the ‘Rust Belt’. Although through a combination of good luck, hard work and good mentoring Vance is living the American Dream, most of his class are not. Vance details an almost universal ‘its not my fault’ malaise. What I would call the Anse Bundren syndrome, where every misfortune is blamed on someone or something else. There is almost total cognitive dissonance and no thought is given to the personal decisions that every one of us, hillbilly or not, must acknowledge as leading to our current situation.

When Anse says to Addie ‘it wasn’t any luck living on a road when it come by here’ she says, ‘Get up and move then’. The metaphor goes right over Anse’s head. He derides her reply as ‘just like a woman’. I think ‘As I Lay Dying’ is as much about decision making and the intended and unintended consequences as any great book in literature.