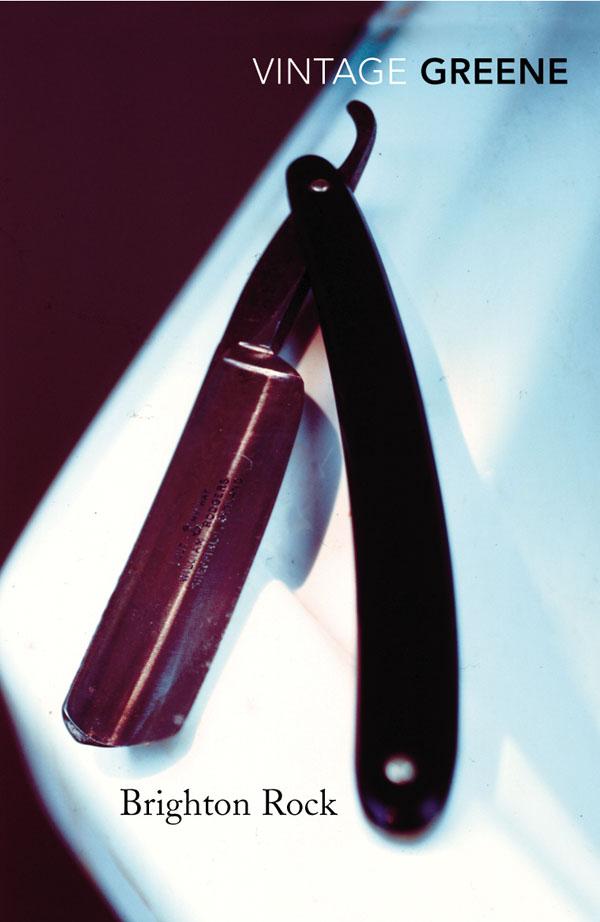 It is quite apt that in the month of promising to undertake this review, Graham Greene himself a member of the secret intelligence service whom worked under the infamous Kim Philby is also noted for aspiring John Le Carre, possibly even as his progeny, the author we are currently reading in The Spy Who Came In From the Cold.

First published in 1938, Brighton Rock, and Greene’s ninth novel, follows on from his eighth novel, A Gun for Sale, whereby a leading gang member in Brighton is murdered, with his throat slit by a switchblade, incidentally, pictured on the cover of Brighton Rock but also to play a part in the novel.

The first line of Brighton Rock begins with:

“Hale knew, before he had been in Brighton three hours that they meant to murder him.”

Retribution was in the air, and the scene setting of the first chapter being the linkage from the past novel to the present and the introduction of Fred Hale, soon to be deceased, his murderer introduced as The Boy, later to be known as Pinkie Brown, leader of his deceased boss’s motley crew of thugs. By chance, the soon to become detective, or woman spawned, Ida Arnold, is the other chess piece in this novel. The book starts as a regular whodunit except we already know most of the pieces including who the murderer is; what is interesting is the detail has been deliberately left out. We are also introduced to the term Brighton Rock, the meaning of which relates to the sugar candy sticks popular in Brighton.

And thus the remainder of the book is how these two chess pieces move about the board, one trying to evade conviction and removing any form of exposure, whilst the other, Ida, is trying to unravel why the murder of her “Fred Hale” is not called for what it is, with the ‘bogies”, a term of endearment for our police brethren, unaware of foul play.

A particularly interesting section depicts Race Day at Brighton, a major scuffle involving long handled switch blades and all the sleaziness of bookies, exploitation and gangs of the 1930’s.

And that is essentially that, all two hundred and sixty-nine pages worth, about the despicably unsavoury Pinkie Brown and his devilish exploits of evilness and evasion including an additional murder, bribery, corruption, deceitfulness, muscle and treachery. He even goes so far as to marry the sixteen-year-old Rose, whom was unfortunately mixed up in the treachery, to silence her.

Now Pinkie Brown is not your average villain, aged seventeen and wizened beyond his years, he doesn’t drink nor smoke, nor enjoy the salaciousness’ of the woman form, in fact he finds it all abhorrent. One could think of him as a tough guy, but he really needs to toughen up and live a little.

The book concludes with Pinkie being outplayed by a less formidable opponent in Ida Arnold, and we are no more the wiser as to how the murder occurred, so much so that some have speculated that “Brighton Rock” may have played a part. Thus, I will leave the audience guessing as to how candy cane may be used as a weapon of choice, and not leaving a trace of foul play. Overall, a well-constructed whodunit!