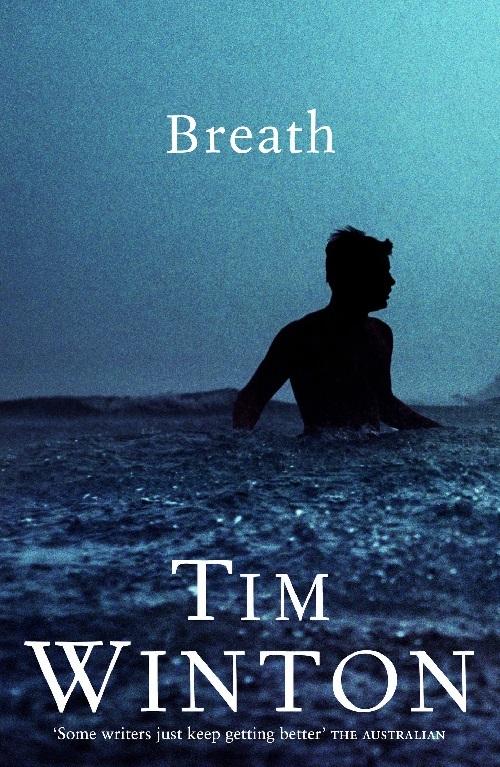 ‘When you make it, when you’re still alive and standin at the end. You get this tingly-electric rush. You feel alive, completely awake and in your body. Man, it’s like you’ve felt the hand of God. The rest is just sport’n recreation, mate. Give me the hand of God any day’.

The archaic definition of Breath is ‘the power of breathing; life’. So, if inhaling and exhaling can give life, it must also have the power to take it away. This is the line Tim Winton explores in his eighth novel and twentieth book, further cementing himself as one of the great Australian storytellers. Anyone familiar with Winton and his work knows of his love of the ocean, the coast and of surfing. This however is no simplistic surfing adventure novel. What slowly unfurls across this story is the duality of breathing, pushing limits, roles of father figures, the grace and harshness of masculinity, mateship, sexuality, and the fallout of lost abilities.

An old and experienced paramedic, Brice Pike looks back on a particular point in his life after dealing with a teenage adventure gone wrong. It is through his recollection that we learn that 30 years prior the dead teenager could have been him. In a small coastal town in 1970’s Western Australia we see Pike growing up, testing the limitations of his abilities with a like minded loon Loonie. These two mates eventually become obsessed with surfing, upon first seeing it done Pike reflects:

‘I couldn’t put it into words as a boy, but later I understood what seized my imagination that day. How strange it was to see men do something beautiful. Something pointless and elegant, as though nobody saw or cared’.

From holding his breath at the murky depths of the river to gasping for air after being pounded by wave after wave Pikelet chases the limitations of being. How far can this life-force be pushed and how can it be pushed. What starts as boyish fun over time turns to teenage recklessness and traumatic naivety. The significant turning point is the introduction of a mysterious hardened surfer, Sando.

The boys are soon taken under the wing of Sando, who teaches and challenges the boys in their surfing and resilience. The role of Sando in the boy’s lives fulfils their desires of a spirited father-figure role as the pair either are rebelling from the hard-ass or the dopey type fathers in their lives. With Pikelet not yet being able to see the tender and caring nature of his own Dad. Winton also uses this relationship to an extent in exploring the Biblical allegory of Cain and Abel which also allows the growing contrasts in personalities between Pikelet and Loonie.

As the wave folds over, we and Pike are yet to realise the significance of these moments until after they have been passed through or until we are back a shore looking out to the great expanse that we were just swimming in.

The way Winton subtlety crafts the story over time, the unfurling of characters and in some way lack of dramatic climax leads us to believe that the recollection of Pike’s life is insignificant, looking back however these small moments, fleeting feelings and emotional triggers are what make up our lives. Their significance plays through their subtlety and without knowing steer our lives. Their cumulative effect creates the wave of our life. Passing through Pike now realises through this recollection that his complicated relationship with Eva, Sando’s wife, came to be his undoing. The stormy sea of emotions that teenagers bear swells within and it is here Pike finds the limitations of this life-force.

While Winton’s Cloudstreet is an unarguable Australian classic embraced by young and old, Breath may surprise some readers in its dark themes. While dark the novel is in many ways meditative to read and poses many philosophical thoughts in it reading. The power of the novel rests its subtleness, the use of surfing to explore the present themes and the simple yet eloquent way Winton uses language. Personally, the novel was even more powerful and meaningful in its second reading. Having known the story, the reader is able to soak up the themes and savour the written word of Winton. Through this novel we are sent out with its characters to the beyond, venturing to the limits of their being. With Pike we keep going, breathing, experiencing everything that happens from natures beauty to sexual terror. We keep going, breathing, because no feeling is final.