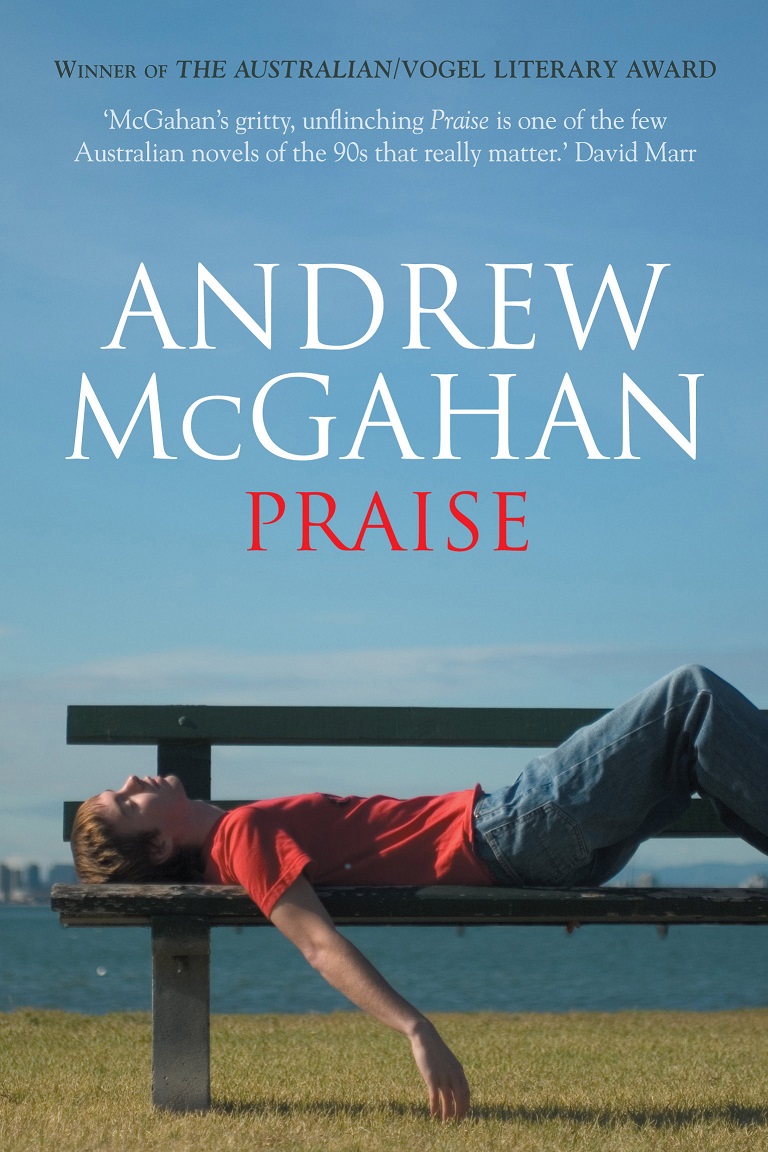 “Praise” is essentially a fairly dark romp through the early twenties life of Gordon, a young man who has left the family farm in regional Queensland for a non-life in Brisbane. That is, Gordon is almost defined by his lack of ambition, his ambivalence over most matters and his failure or disinterest to pick up on sexual cues from women.

If anything influences how he spends his day it is finding the path of least resistance to his comfort zone, which usually involves endless smoking, beer or cask wine drinking, lounging around and avoiding work.

Readers are introduced to Gordon as he makes a decision to quit hotel work and go on the dole. He is called up by Cynthia, a co-worker and invited over for the inevitable drinks and stays for a week. We get some insight into Gordon’s indifference to sex which is diametrically opposed to Cynthia who is demonstrably sexually voracious, in fact most of the time. Just how this odd match works itself out is very central to the story.

Cynthia moves in to Gordon’s boarding house flat which is cheap, grungy and houses misfits, drunkards, drug addicts, DV victims and perpetrators. So it is an inner city shelter of sorts, with an array of social dysfunction, as well as offering lighter moments and camaraderie. Seems to suit Gordon quite well and forms part of the backdrop of his drop-out lifestyle.

Much of what we are told illustrates how Gordon chooses to spend his time and there is an almost repetitive “formula” of sleeping in, getting food , meeting friends to commence a heavy drinking session and having sex (which is chiefly about going along with what Cynthia demands ) . What tends to vary as the story progresses is what supplementary drugs can be obtained (heroin, ecstasy or nitrous oxide), what venue is convenient and which other friends are involved. Much of the book follows this pattern.

So “Praise” is not so much about plot and events as an insight into a lifestyle (self-destructive to say the least) and dysfunctional relationships.

There are moments in the story where you sense there may be some trigger which propels Gordon out of his fairly bleak subsistence rut. For example there is a stage where it is clear he loves Cynthia ( it is reciprocated) and there is a sense that a relationship commitment may improve or resolve things but he deliberately rejects this ( and lets her leave for Darwin) . Also there is a point where his asthma and lung capacity are so bad that he is hospitalised, read the riot act and “cleaned up”. His brother even offers him a job at the same time.

I suspect I would not have been the only reader urging him on at this point to transform himself and shake off the self-destruction. Let’s just say this is not a lived happily ever after tale !

It is also clear that Gordon did not come from a socio-economically challenged or socially dysfunctional family. Indeed his siblings were quite successful in careers and relationships. So, something of a mystery, at least to me, as to why Gordon seemed so apathetic and content with a way of living based on elementary survival, escapism and avoiding any commitments.

In this sense, the extent to which “Praise” is semi-autobiographical is quite interesting, if not perplexing. Andrew McGahan was born in Dalby with the support of a large Catholic family, private schooling and partial university. He has lived in capital cities as a young adult. One might surmise he found country living stifling as a young person and needed a diverse urban life, perhaps. Other than this it is hard to draw parallels between an industrious and successful author like McGahan and young Gordon, who is nonplussed about everything and believes in nothing other than temporary self-gratification.

Overall “Praise” is well written, punchy and flows really convincingly. It was a good read, though somewhat bleak and depressing. If there was “dark humour”, it escaped me, but it certainly made me reflect on different values, lifestyle choices and mortality. Was this part of the author’s objective?