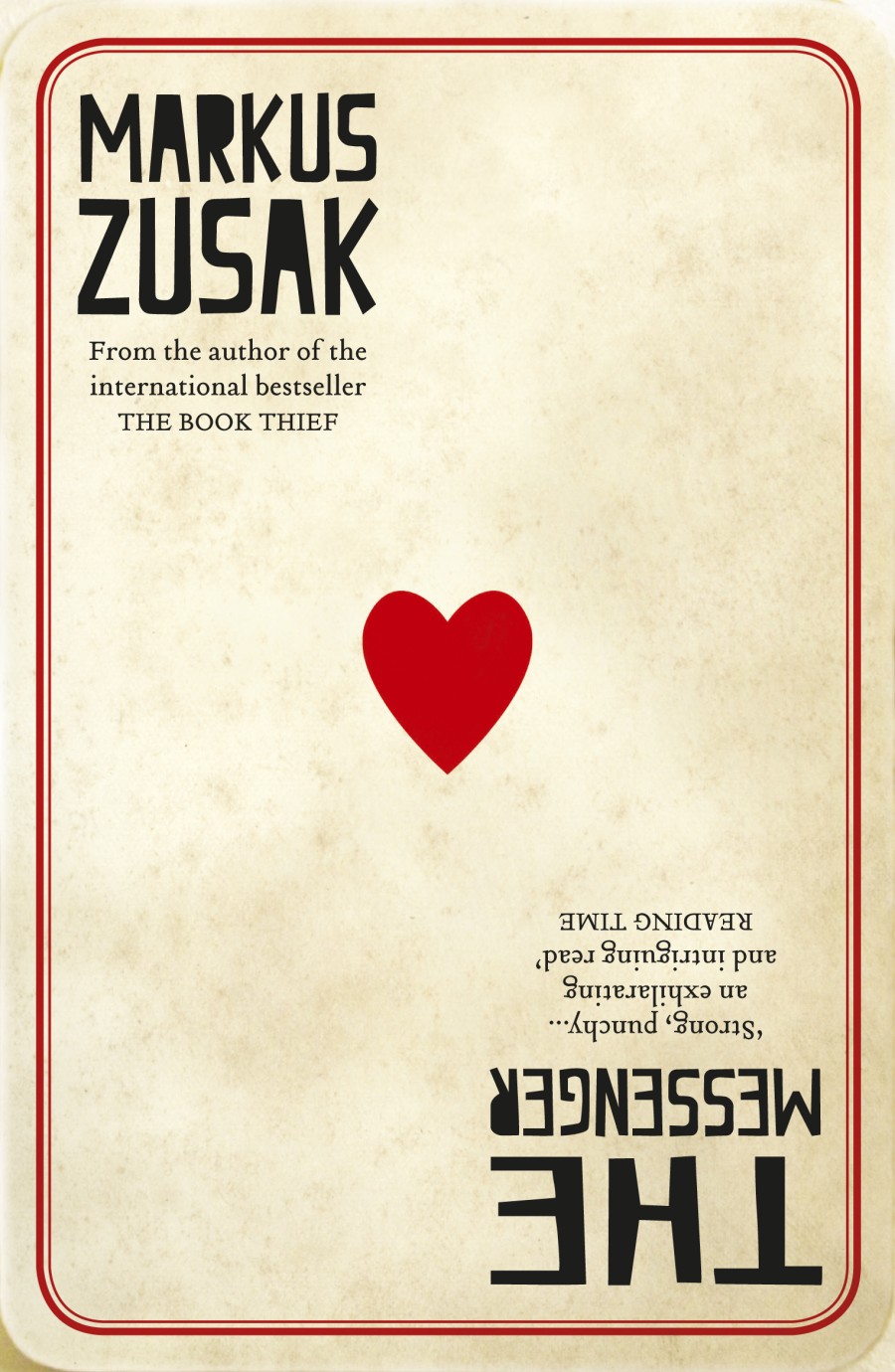 Ed Kennedy is a out on his luck taxi driver, with friends he doesn’t particularly like, a job that’s going nowhere and a family that either dislikes or is disappointed in him. One day, he foils a bank heist and gets chosen by some form of higher power (maybe God?) to carry out missions that will help people.

Accompanied by an entourage of bizarre friends, Ed searches for the closure he so desperately needs by helping the strangers presented to him on playing cards he gets randomly in the mail. Thus, Ed Kennedy, aka “The Messenger” aka “A younger and less interesting Liam Neeson (Taken, not Schindler’s List)”, hurts/helps those needing a hurtin’/helpin’ in his search for the truth as to who’s behind the missions and why they’ve chosen him.

There are some great characters in this novel, my personal favourite being his mum, who’s a right jerk, but believably so, and the hopeless fleabag The Doorman, cause I’m a sucker for old dogs with personality. Zusak highlighted the ‘small town blues’ typical of a Springsteen song quite nicely and though his setting felt a bit too magically real for me at times, it works as a decent backdrop to the action.

But is it any good?

My answer…Kind of… it shows promise…and would probably have been forced upon me in high school as “a great piece of young adult fiction” … but I didn’t like it. At all. And I didn’t make this decision lightly, I felt a pang of “I’m probably not going to like this” about a quarter of the way through, buried the emotion deep inside me as I thought it was just me being the cynical shit I am, but unfortunately this emotion made a strong comeback, with feeling, towards the end. Not my cup of milky coffee I share with my dog (that was too weird for me Zusak, dogs should not be caffeinated!). It’s the type of book where you read it and go “I wonder if this is their first book”, cause it reads a lot like a first book and you’re willing to let things slide – then you find out that it wasn’t their first and make an “oh dear, well you can’t win ‘em all, I guess writing a novel isn’t so easy” face.

All this being said, I can see a good novelist in here. He’s got to sort out some of this dialogue, character development, sudden personality 180s and sappy after-school special storytelling BS, and then, through his toil, a better novelist will arise. And lo and behold, one did, as the Book Thief, his next and most famous/acclaimed novel was better by a mile. Confetti showers for all!

Anyway, this is just one dude’s opinion. The Messenger has four and a half stars on Goodreads, so I guess I’m one of those dinguses within the minority. So be it. I don’t regret reading it, as how else would I have been so amused by my chapter’s colourful opinions of the book during this difficult time in the world (The COVID-19 Pandemic, if you’re reading this in the distant feature)? It touched on some important themes such as mateship, altruism, working through loss and the power of completing ambiguous, dangerous tasks set out for one via a stranger in the mail. To anyone who liked it, loved it, or were inspired to interpretively dance out its entire plot, I say without hesitation, “You’re The Messenger, champ… of awesome.”