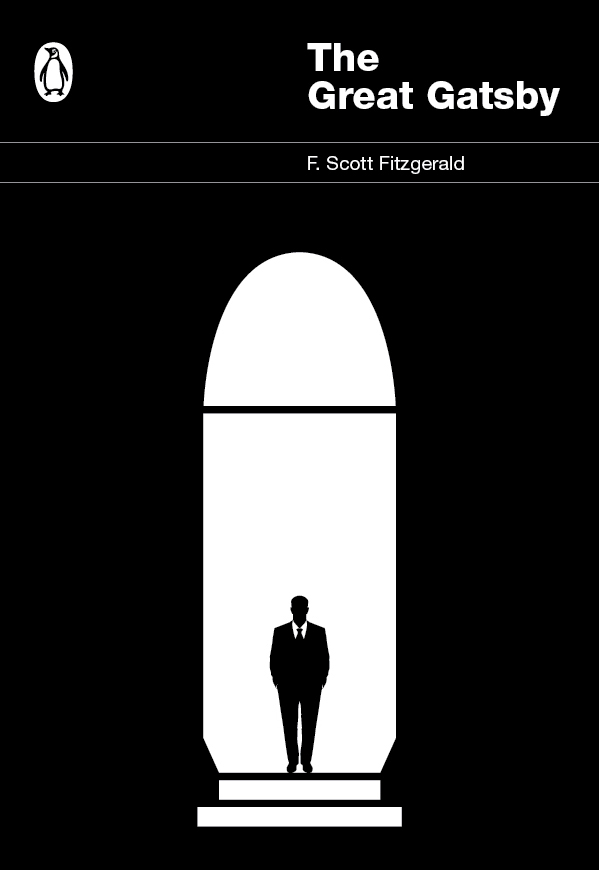 Scott F. Fitzgerald’s story takes place between Long Island and New York in the early 1920s, the time of prohibition in America. The story is narrated by Nick Carraway, a lost soul who in trying to find his place in the world after returning from the war, lands a job as a “bonds man” on Wall Street and moves into an eighty dollar a month cabin at West Egg, Long Island. His cousin, Daisy, lives with her husband Tom Buchanan in a mansion across the bay in the more fashionable East Egg. Tom Buchanan is a physically imposing man who comes from old money of which he has more than he knows what to do with. Tom is a bore and a bully who loves to forcefully present his ill-informed right wing racist views as “scientific facts” which he has collected from a book spouting white supremacy.

Enter Jay Gatsby. Gatsby also has loads of money and lives in a castle across the bay in West Egg, next door to Nick, from where he can see the green light flashing on the end of Daisy and Tom’s dock. Gatsby is an enigmatic character of which little is known other than he is constantly throwing outrageous parties to which all are welcome.

Nick observes the shenanigans next door until he finally gets a hand-written invitation from Gatsby himself. At Gatsby’s, Nick runs into Jordan Baker, a celebrity woman golfer who he has previously met at a dinner party at Daisy and Tom’s. Together they trudge around the party looking to meet Gatsby, about whom they’ve heard all kinds of rumours ranging from him being related to the German kaiser to him having once killed a man. Eventually they find Gatsby and he and Nick strike up an unlikely friendship.

However, all is not what it seems. Five years prior, Gatsby and Daisy had a love affair at a time when Gatsby was in the army. In his uniform he cut a dashing enough figure to sell himself as a man of substance to Daisy and win her affections, even though he had neither money nor social standing. Luckily for Gatsby, the war sucked him up before he was forced to reveal his true self.

The war ends and Daisy waits for Gatsby’s return. Gatsby, for his part, knows he can’t return until he’s made something of himself and makes his excuses. Daisy, thinking that Gatsby has lost interest, marries Tom Buchanan.

The years go by and Gatsby re-invents himself with the help of some shady but powerful friends. He learns how to behave like a gentleman and makes a shit ton of money by bootlegging and conducting shonky business deals. When he’s ready, he buys the castle on the bay from where he can practically see Daisy and prepares to reclaim her love. The parties fail to attract Daisy, so Gatsby enrols the hapless Nick in a plan to get he and Daisy together over tea and the love affair is rekindled.

Gatsby is bent on getting Daisy back permanently and obliterating the intervening five years. The climax comes when. Tom, Daisy, Nick, Jordan and Gatsby are together in New York and Gatsby pressures Daisy to tell Tom that she never loved him. Gatsby needs to rewrite history in order to move forward but Daisy folds and rushes out of the room. Gatsby follows her and they jump in his car and head back to Long Island. In a small town along the way, in the ash heaps of Long Island, a woman runs out of a garage and into the road. Gatsby and Daisy hit her and kill her without stopping.

We’ve learned earlier in the story that the dead woman, Myrtle Wilson, was Tom’s secret lover and when Tom, Nick and Jordan drive up some time later, Tom is shocked to find his lover dead. He does, however have the wit to convince George, Myrtle’s husband, that it was Gatsby having the affair with Myrtle and that it was Gatsby driving the car that killed her, even though it was actually Daisy driving. Daisy runs back to Tom and George shoots Gatsby in his pool the next day.

Fitzgerald appears to be using this story to take a swipe at entitled American society. None of the characters are likeable and by the end of the book I didn’t much care what happened to any of them. Even Nick, who seems a decent chap initially, shows himself to be a spineless individual who spends considerable time justifying his own self-serving behaviour. There’s a moment where he tells how he had a dog when he moved into his house. “at least I had him for a few days until he ran away”. I believe this flippant lack of concern for a living thing says something about Nick’s character. Nick believes he’s more honourable than the others, describing himself as “one of the few honest people I have ever known” and portrays himself as the one true friend that Gatsby had.

Tom and Daisy are both entitled. To quote Fitzgerald, “they were careless people, Tom and Daisy – they smashed up things and creatures and then retreated back into their money or their vast carelessness or whatever it was that kept them together, and let other people clean up the mess they had made.” This sounds to me like a bitter statement Fitzgerald himself is making about people he knows. Tom scorns the self-made Gatsby when he learns how Gatsby made his money, but fails to recognise that he was handed his own wealth and has never had to do or produce a thing in his life. While Daisy plays the ditz, she makes remarks that indicate she knows about Tom’s affair and about what an uncultured oaf Tom really is but she is prepared to sacrifice her own self-worth to live the life. Sadly, she has no higher aspirations for her own daughter, believing the best thing her daughter can be is a beautiful little fool.

George and Myrtle Wilson live in the ash heaps under the gaze of Dr T.J. Eckleburg, a big-brother-like character depicted by two bespectacled yard wide retinas on a derelict billboard. They might well represent the great unwashed of America, prey to Tom who wasn’t above using them to satisfy his carnal desires and to perform the dirty work of disposing of Gatsby.

I believe every character in this story is there for a reason but I did struggle to understand the purpose of Jordan Baker. She is a girlhood friend of Daisy’s who is trying to match her with Nick. Nick gets cold feet when he hears rumours about Jordan cheating at golf and lying about leaving somebody’s open top car out in the rain. While these objections say more about Nick than Jordan, Jordan’s celebrity may have led her to believe that the truth and the rules don’t apply to her. Then there’s Gatsby himself. While a flawed character in his own right, Gatsby to me showed the most purpose and integrity of all of them. He pursued his American Dream relentlessly, that of having a good life with the woman he loves. While he had to invent a persona in order to get where he needed to be – his habit of calling everybody old sport was truly irritating – it seemed that he hadn’t completely lost himself. He at least had the integrity to take the blame for killing Myrtle when it was Daisy doing the driving.

But, ultimately, Gatsby is the failed hero. It’s Gatsby winds up dead and taking the rap while the rest of them go back to their daily lives unscathed.

There is irony in the title. In the end, the status quo emerges victorious and Gatsby is far from Great.

“A beautiful portrait can be of ugly people” said Mick from the TBGC Fortitude Valley Chapter and with that my thoughts about this book crystalised.

Here is one of the great novels of the “Lost Generation” of American authors. That loosely defined group of men who, alive at the dawn of the 20th century embraced its change, often from its darker side. Not for them the gloss of motor vehicle brochures and Orange County sub-divisions to dull their ability to sense malicious intent. Here were writers willing to take sides in contemporary history’s greatest evolution of political theory and the changes they wrought.

This political evolution not just divided the populace of nation states but eventually brought the world to butchery on a mechanised scale previously unseen. Movements that set the terms for a century of conflict and wars both hot and cold. So Gatsby is set against the backdrop of America’s first giant military steps onto the world stage. This is the America of post WW1. Its characters present as baskting in the glory of a realisation that its nationhood was finally achieved on the world stage. There is an underlying enthusiasm ignorant of the depression’s horrors shortly to arrive. A blissful feeling for middle America who wasted its time taking sides in the prohibition debate. Gatsby describes a feeling of entitlement from returned servicemen that theirs would be a land welcoming of their wartime exploits and generous of its rewards for its conquering heroes. Yet here is an America still deeply rooted in its colonial thinking that greed is good and that class is achieved through the adding of zeros to bank account deposits.

Ourt narrator to the Gatsby is Nick. A young man, perhaps best described as the poor cousin of success, who strikes out for more nourishing climes more challenging than he had foreseen. His closeted sexuality, absence of personal capital and the fate of tenancy leave him drifting towards those in his new world that emulate his desire to achieve but do very little to further his cause.

Central to Gatsby is a naive love story, a tale of love lost but never forgotten and a burning all-consuming desire to re-possess that moment in time. This ambition drives fates to collide, the selfishly wealthy make choices that only the obscenely rich can, and as always ordinary mortals fall victim to such unfettered powers. This is a novel of narcissism.

Fitzgerald’s prose and style is simply put; beautiful. His writing is a masterpiece that condenses all that is hopeful and hateful in the microcosm he has created. Along this journey we encounter a tapestry that is rich with characters. The Jewish gangster bookie, the burnt-out mechanic losing his wife to a rich man’s titillations, the array of visitors to Gatsby’s home enamoured with his vast wealth but loyal as a pack of sewer rats. Like Baum’s Wizard of Oz, we find at the end of an exhaustive journey that not all is what it was made out to be. That despite noble intention man’s ability to do harm in the cause of their own good can often swallow whole lives in its wake.

Along the journey I loved and hated, cheered and raged. I seen saw glimpses of the type of conflict - love relationships best articulated in the tale of Helen of Troy and that drove Queen Maeve to the “Cattle Raid of Cooley”. For what greater forces shape our world than the warring tribes of love, lust and ambition?.

Read The Great Gatsby. You may simultaneously love or hate its characters along the way. But when you turn the last page challenge yourself to ask one question: what will the human suffer for love?