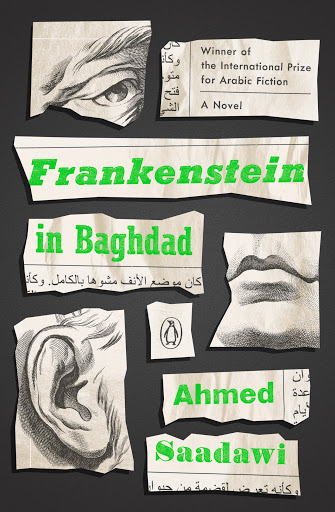 Frankenstein in Baghdad (FIB) is at its core a commentary on sin. How do we countenance our actions as moral, when the longer we live, the more these values are contradicted by our own moral compromises?

FIB explores this in the world of post-invasion Baghdad, where society has broken down while American forces retain an arms-length hold on the city from the green zone.

The characters are regular Iraquis (cafe owners, drivers, business owners, journalists) whose depictions paint a startling picture of life in what, at the time, was one of the most dangerous cities in the world. Macabe scenes of marketplace bombings and morgues are where the throughline of the story emerges, and the narrative shifts from a socio-political commentary into surrealist-horror.

Hadi al-Attag, a junk dealer, who spends his time scouring the streets and drinking in tea houses, routinely comes across dismembered bodies in his traversal of the city. Seeking to give them a proper burial, he routinely collects the pieces and starts a grim makeshift body repair shop in his garage. As he sews pieces of bodies back together, he mixes up pieces of different bodies.

Meanwhile, the spirit of a bombing victim, searching for a body, inhabits the “Frankenstein” in his shed. The Frankenstein then gets up and, seeking revenge and redemptions goes on what can only be described as a killing spree to die for.

As Frankenstein gains notoriety the story evolves from spiritual commentary, into a quasi-comedic pursuit to find the vigilante killer by the authorities, a journalist, and Frankenstein's creator.

Enjoyable more for its insights into Baghdad at this time in recent history, the author provides echos not only of its classic namesake, but also modern classics like Fight Club (at one point the Frankesiten has his own posse of supporters out for blood) who themselves devolve into a critique of Islam and Christianities' various factions; none can agree on how best to follow their Frankenstein, and thus they all kill each other.

As our Frankesiten continues, his bodyparts start to decay, requiring him to take other parts from his victims, taking on the evil of the victims, thus imbuing the Frankenstein with their evil, forming the core commentary of the novel.

There is more to the story, but suffice to say there are enough turns in this to keep you engaged, although it is not likely to become a classic. Ahmed Saadawi wrote the book in Arabic originally, so perhaps parts of the beauty and policy of this novel have been lost in translation; some of the narrative devices or allegories seem trite, but this may be my lack of cultural context. What is clear is the role religion plays in the lives of the characters - in the face of such horror - imbued in the Frankesitien, but in real life the world around them literally exploding around them, how could they not be?

Ultimately FIB is an engaging narrative and view into the lives of people who have lived through war and its horrors - with the surrealist horror of the story making the truth of their horror, ironically, easier for the reader to deal with.