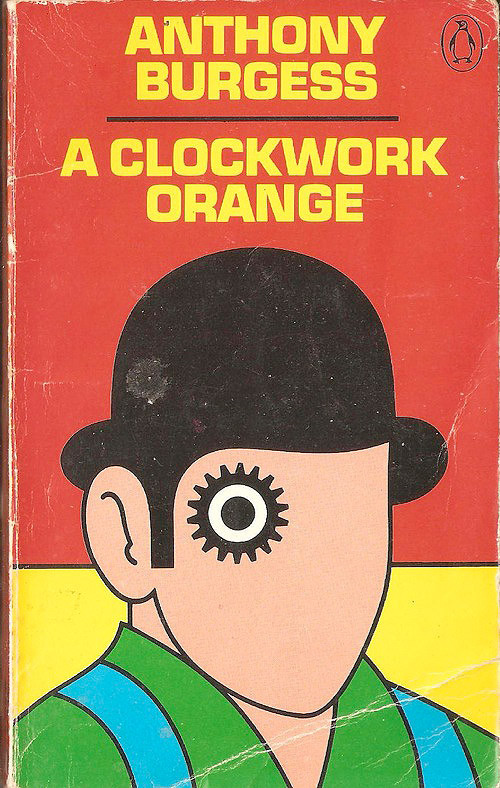 Our humble narrator in ‘A Clockwork Orange’ is Alex, Alex is 15, living with his not so strict, caring and hard working parents, he goes to school and has a passion for Beethoven’s 9th. Evenings he enjoys drinking Milk Plus, ‘milk with daggers in it’, to sharpen you up for a bit of ‘dirty twenty-to-one’, the ‘ultra-violence’ (bashings) and ‘the old in and out’ (rape) with his ‘Droogs’ (gang) of which he is the leader.

Written heavily in ‘Nasdat’ a teen speak, that demonstrates rebellion and a rejection of the governing society, one is taken into a not too distant future, sucked into a dystopian world, where violence reigns supreme, political parties seem to be all the same shade of grey and general ethics overlooked for the greater good. Alex recounts his exploits and experiences seemingly without any understanding of right and wrong, and it is through this twisted looking glass we explore themes of good and evil, punishment, rehabilitation and the place of free will in it all.

Still controversial 53 years after its initial publication, you will probably come to this book for the violence and leave with philosophical questions, and asking; is Alex redeemed through his journey?

Anthony Burgess brings us a story of dystopian struggle; both for freedom and for individuality amongst the monolithic. While this book is renowned for its ultra-violence and graphic scenes, Burgess writes with an hypnotic rhythm which lulls the reader into a Stockholm like trance; nearly but not quite deceiving us into the lie that is Alex’s ongoing social engineering project. The method of addressing the reader as ‘Brother’ and labelling the protagonist as ‘Your Humble Narrator’ serves to induce the reader into Alex’s schemes, giving a sense of ‘You are now one of us’, another droog.

A Clockwork Orange forces us to consider the structures around us. The massif that Burgess creates to demonstrate the State (inflexible, absolute) can be reflected onto our own lives, our own beings. Alex’s misadventures are the expression of a struggle against this monolith, his anger and apathy merely instruments to be utilised ultimately by the State.

Burgess asks us a very clear question with this book; is it better to choose to be evil, or forced to be good? And he answers just as clearly; it is better to choose. It is choice which brings the humanity back into the absolute structures we live in.